My preparations for a recent trip to the Netherlands city of Maastricht  included looking up ‘things to buy in Maastricht’. Along with coffee, chocolate, pastries, and little china statues of saints, I was intrigued to see that tourists can buy copies of the Leesplankje or Reading Board made for children learning to read Mestreechs. This is the local dialect of Limburgish, itself a variant of Dutch (either a dialect or different language according to who you read).

In the hotel room we had a welcome notice written in Mestreechs. Although the rest of the note was in both Dutch and English, the poem was not.

I downloaded to my phone the Google Translate for Dutch, which struggled to cope:

So I asked the hotel receptionist, who told me it means:

Where we speak the language in a comic way.
Where our hearts are full of beautiful things,
Where we stay loyal to our city
Standing next to our father and mother
This is our Fatherland
From the people of Maastricht.

Keen to know more about Mestreechs and the Leesplankje, I was able to find out from a website in Dutch that the Leesplankje was a system of reading instruction used in Dutch from the late 19th century to mid 20th century. Each child had a board with pictures and the main sounds in the language, and a box of cards with other words which they then put on the ledge in front of the right picture/sound. I asked about them in Maastricht bookshops, but although people knew what Leesplankje were, no one knew much about them. 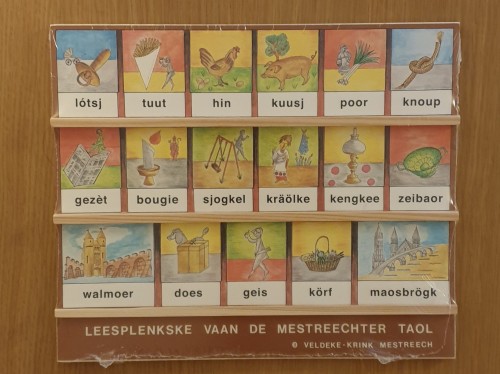 A the Tourist Information Centre I bought a Leesplankje reproduction, as well as a couple of postcards in Mestreechs. My favourite was the one which translates into ‘That gives me goosebumps’ (in Dutch ‘kippenvel’, or chicken skin). I thought I had better check what giving someone goosebumps implies, because I wanted to send it to a Dutch friend and was not sure if it had some sort of negative meaning! But evidently not. The staff told me that the Mesteechs word for goosebumps, ‘sjevraoje’, actually comes from the French ‘chaud-froid’ – when written in Mestreechs it looks so different that even some speakers of both languages had not realised the connection when I checked with them.

There does not seem to be much else written in Mestreechs, although I did see a book of stories written and illustrated by children, and a few bilingual street signs in the old town.

Maastricht is the ‘birthplace of the euro’, symbol of a unifying Europe, but linguistically it seems that some of the old diversity is being maintained for now – people I met said that Mestreechs is still being spoken in their families. I tried out a few words but did not get much indication of understanding – possibly because my pronunciation was weird, or that people do not expect to hear foreigners speak Mestreechs? Perhaps the Maastricht Tourist Information Centre could add a list of everyday phrases to their repertoire of souvenirs for future visitors.