Lech, Czech and Rus are said to be the oldest oaks in Europe, and it was magical to see them in Rogalin Park near Poznań. These trees certainly are beautiful, and old. They are also broken; in fact, Czech has now died, and the other two are being propped up. But new saplings have been planted beside each one.

Their names are from legendary three brothers Lech, Czech and Rus who went out hunting in different directions to found three Slav states… So Lech is the old name of Poland, and it lives on in the local Poznań refreshments.

This was a sacred grove in pre-Christian times, and the story goes that it was so sacrosanct that the while out hunting the three brothers did not shoot the large elk that appeared in front of them in the clearing. The stag walked off and Lech, Rus and Czech drank mead with the guardian priest of the grove. A happy ending, especially for the stag. Three trees of the grove were then named after the hunters.

If I could rewrite the legend it would be something like two sisters and a brother on horseback, perhaps a proud doe tossing her head in the leafy glade (legends should be poetic), and definitely a priestess tending to the forest grove… Or at least include reference to Mokoš, the Slavic Mother Earth goddess. So much for the folklore, but I am particularly interested in why the oaks were given only male names.

In Poland given names must legally be identified as male or female (with some recent modifications), so the trees could not have gender-neutral names. Oaks symbolise strength and endurance; but surely these are both male and female qualities. And oaks have male and female flowers on the same tree, so they could equally be given female names. 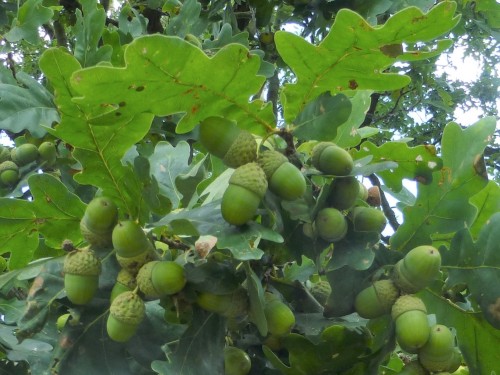 What about other special trees? I searched the internet for trees identified by name. Every example I found was male, no matter where in the world it is—or was—growing. I can only assume that the power to bestow names has been held by men.

When I was born my parents planted an oak. I like to think that if it has any name at all, it would be my name; which as it happens is gender-neutral (in recent times tending towards female). Equal rights for trees!